This research project focuses on gendered-based violence because it is evident that we live in a hypersexual society that parallels the sexual crimes and domestic violence occurring in India. This project provides sources that portray the way gender-based violence is reinforced by the media in both the United States and India. Although both countries are affected by gendered violence, this research project shows how and why there are differences in gender issues in popular culture and the media. The project focuses on the media and its role in sexual culture in the United States and India and the way people perceive and respond to it. This library guide provides sources depicting what the sexual mistreatment of women in the United States is like in comparison to India and the difference in attitudes towards feminine sexuality. It also shows how particular sexual attitudes in each country result in the type of sexual objectification and mistreatment of women that is prevalent within both countries. The sources provided challenge people to think about these topics when looking at media. People express themselves through the media and it can represent a culture. Both the United States and India have deep-set ideologies about women, stemming from religion and strict social norms which eventually lead to confusion and conflict on how women should act and be portrayed. The sources include film, music, magazine articles, newspapers, and scholarly articles on the media. Although the focus is on the media, the scholarly articles provide critical analytical information. There are short commentaries on the information provided in order to guide the reader in their analysis of the media and promote finding deeper meaning in images and information produced in popular culture.

This image was part of GoDaddy’s advertising campaign in which they used Danica Patrick, the famous female racecar driver, in series of commercials to promote their product. 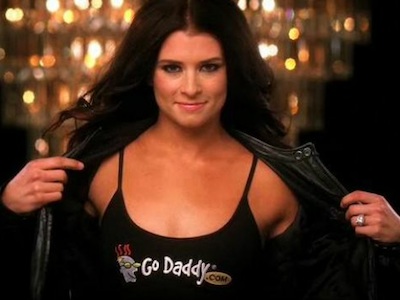