On this page, you will find how NGOs in the United States are helping aid South Asian women experiencing violence in South Asia and the United States. Most of these women experience violence within their own homes, such as domestic or sexual violence perpetrated by the men in their households. These established NGOs support South Asian women through support groups and hotlines within the United States, and by aiding the education of South Asian immigrants and the people within South Asia. These support groups and hotlines help women form strong communities based on their own experiences with gender-based violence. The sources here also include accounts of women’s experiences in both fictional forms and academic material. The film Daman: A victim of Marital Violence (2001) provides a fictionalized account of a family enduring domestic violence. This and other accounts such as, Speaking the unspeakable: Marital violence among South Asian immigrants in the United States by Margaret Abraham, depict what everyday life is like for many South Asian women experiencing domestic violence. Similarly, the images included depict the external and internal scars that come from being victimized by gender-based violence as well as the hope associated with the NGO’s that attempt to help these women. Many of the books and scholarly articles tell stories of real-life experiences involving gender-based violence that provide a solid foundation for these films and images. Also, they give examples of NGOs, mostly within the United States, but some that are based in South Asia that provide women with the support mentioned above.

*Titles marked with an astericks are from scholarly publications. 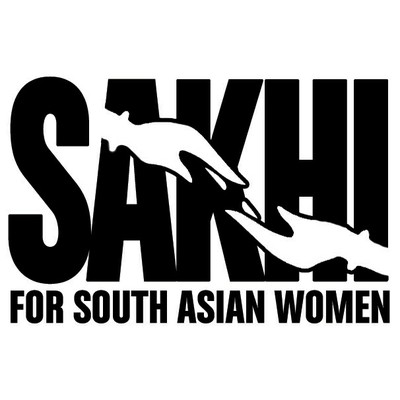 This is the logo for the Sakhi NGO in New York City. It shows two hands reaching out for each other to depict the help and sense of community the NGO provides for women emigrating from South Asia. Click on the image to be taken to the original image source.