Simulations of 3 dimensions can be created in ArcMap using the hillshade tool. This tutorial steps through the process of finding sun angles and applying hill shading to a map.

Add base layer of land imagery: Click the Plus “Add data” icon and select “Add basemap”.

Drag a digital elevation map (xx- DEM.tif) into ArcMap above the base imagery

If you are asked to create pyramids, select yes.

Rename the layer to something meaningful.

Right click on the layer and select “zoom to layer”. 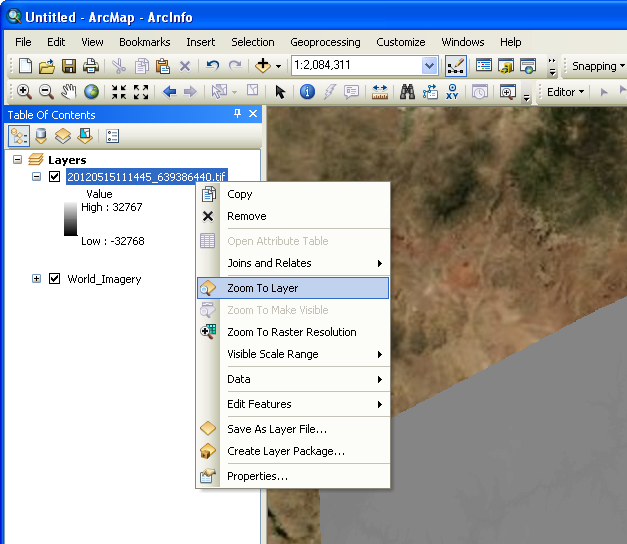 It will look gray with little variation.  This is because the elevation values fall in a narrow range less than the full possible range.  To get a better view of the data in a DEM layer:

Under the Symbology tab, select “Stretched” in the “Show: “ box.  Under “Stretch” in the “Type:” drop down, select “Minimum-Maximum”. 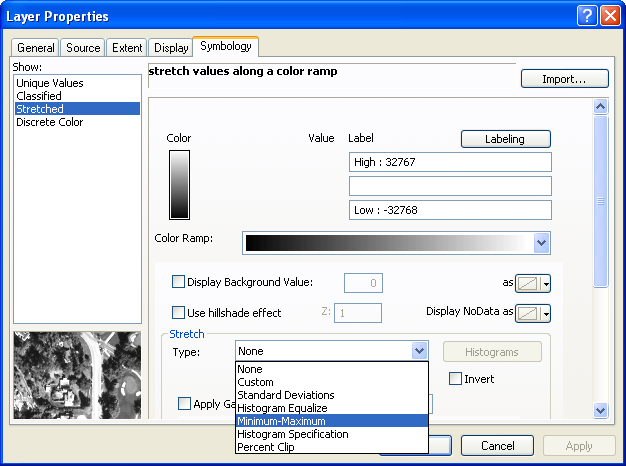 You may be asked to compute statistics.  Respond “Yes”.

Select “OK” to see the results, the low areas will be black and the peaks will be white. 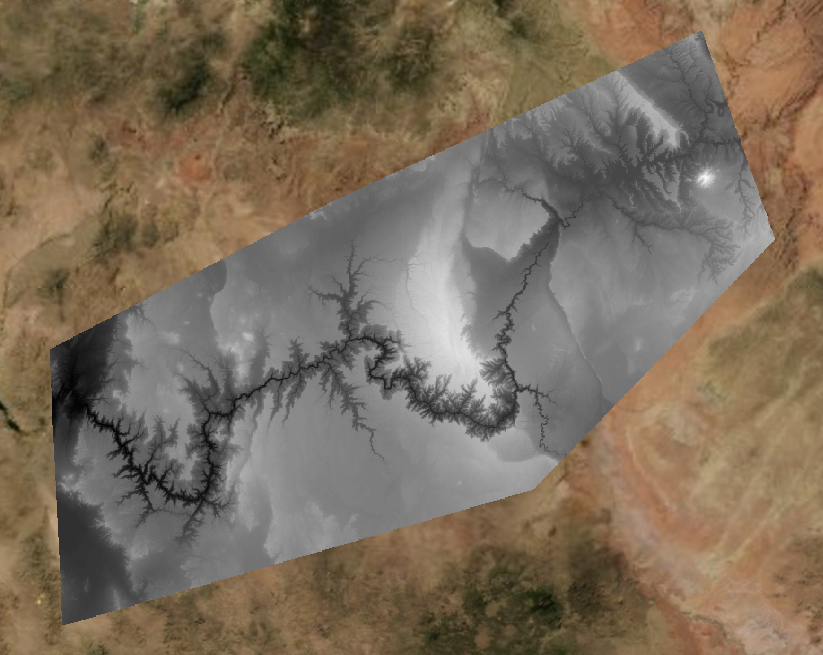 In this Layer Properties dialog, there is a check mark for “use hillshade effect”.  Selecting this will give a quick approximation of some shadows, but won’t have the detail of a full hillshade analysis. 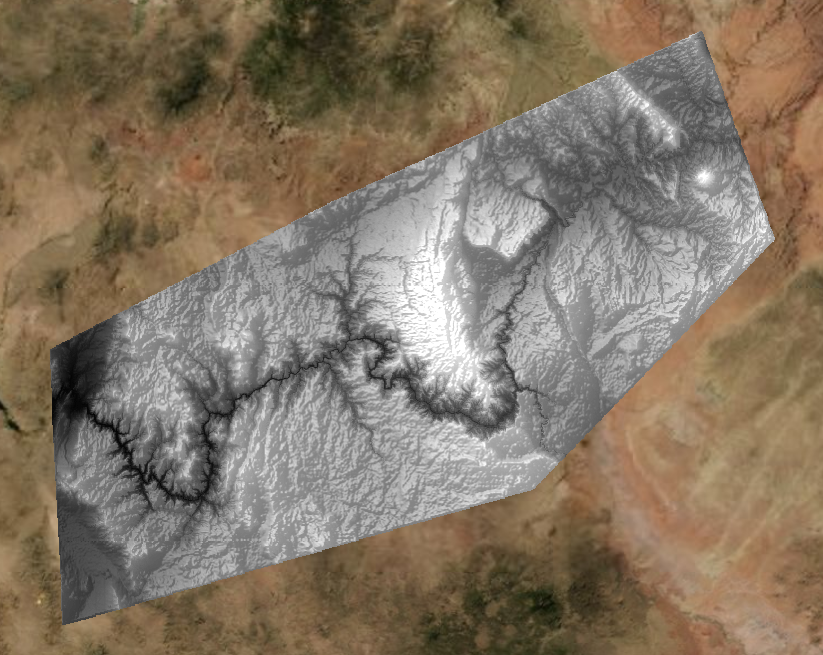 To set a variety of more accurate hillshade effects, start with the search tool.  Search for Hillshade and run the Hillshade tool. 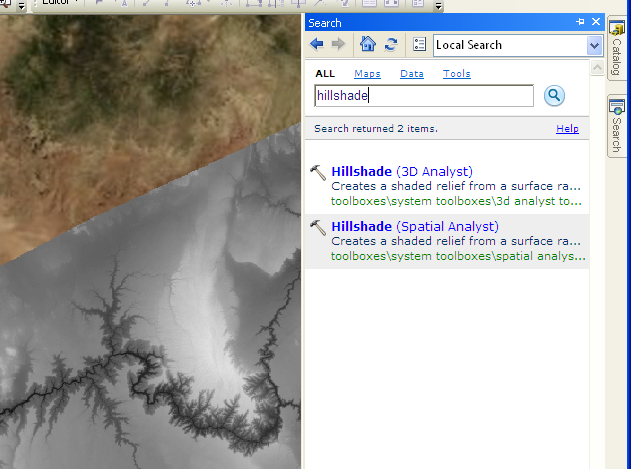 {If it won’t run, you may need to change the extensions in ArcMap by going to “Customize” then “Extensions” and put a check mark infront of “3D Analyst” or “Spatial Analyst”.} 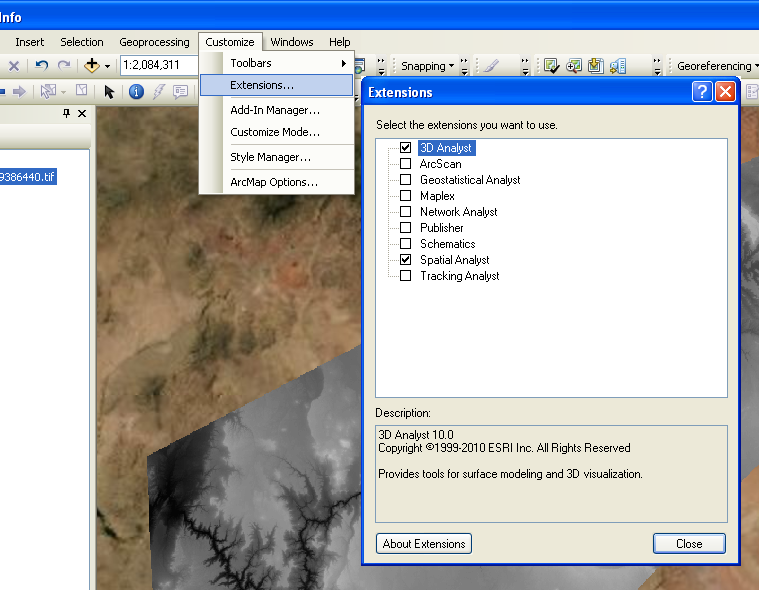 In the hillshade tool, the Input raster is the layer that you renamed.   Set the output raster to a file location and name that is meaningful such as the time and date of the generated shadows.

We need to set the Azimuth and Altitude of the sun.

Use a web browser and search for a “Sun position calculator”.

In one of the calculators, enter the location, date and time of intereset.  It should then return various information including the position of the sun in Azimuth and Altitude degrees.

Azimuth is the number of degrees in a circle from North.  Alitutude is the number of degrees up from the horizon.  Some calculators put zero azimuth to the south, so look at the values to see if they make sense.  In the norther hemisphere, the sun rises in the East and is almost always to the South, so a morning sun will usually have an azimuth between about 90 and 180 with an altitude of 0 to 90.  Closer to the equator, the sun can be further north.

Let us assume that the sun position calculator returned an Azimuth of 91 degrees and an altitude of 37 degrees.  Enter those values in the hillshade tool. 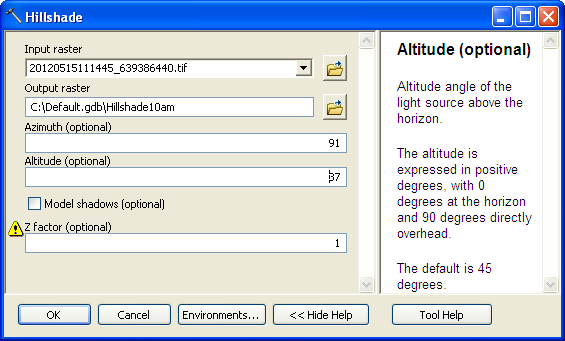 The Z factor is used to exagerate or reduce the altitude effect.  With a factor of 1 (the default), a meter horizontal is the same as a meter vertical.  The input DEM is multiplied by the Z factor before calculating shadows, so a Z-Factor of 2 will give shadows as if the mountains were twice as high.

After the tool finish the calculations (it may take a while), it will add the new layer to your map.  Double click on the layer. 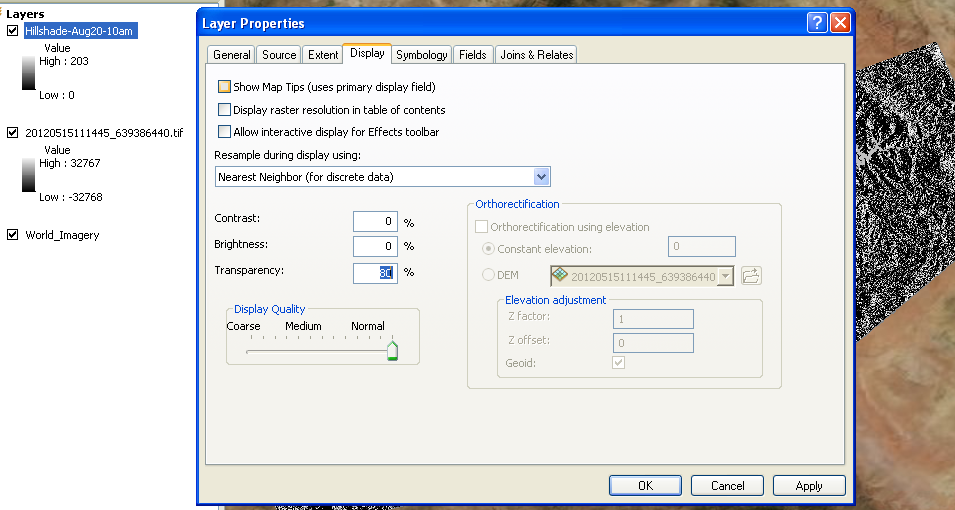 Be sure to deselect the original digital elevation layer.

Under the display tab, reduce the transparency to about 80%.  This will give a simulation of 3 dimensions and allow you to see where shadows will fall at that selected time. 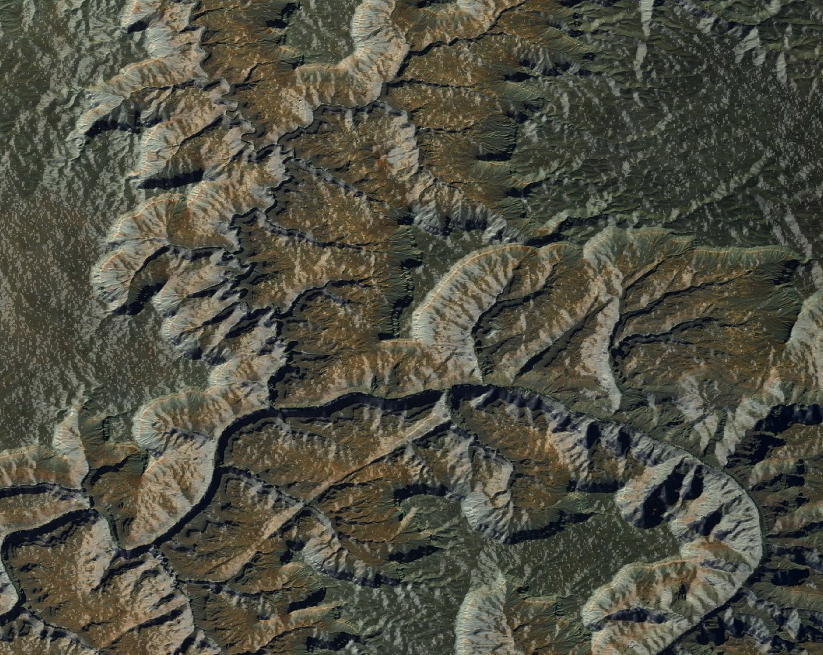 The background image will also have shadows that were present when the photograph was taken.  This can make the hillshade effect less effective, but turning the generated hillshade layer on and off can show where the shadows and sunlight will fall.

Except where otherwise indicated, original content in this guide is licensed under a  Creative Commons Attribution (CC BY) 4.0 license. You are free to share, adopt, or adapt the materials. We encourage broad adoption of these materials for teaching and other professional development purposes, and invite you to customize them for your own needs.