This guide provides a general walkthrough of SPSS's basic features.

The Data Editor opens immediately upon starting SPSS and, when empty, looks like a typical spreadsheet. When data is loaded into the Data Editor, each column will represent a variable and each row will represent a case. Selecting the tab at the bottom that's labeled "Variable View" allows the user to view and edit information about each variable. To open a new Data Editor, select "File"->"New"->"Data." When the contents of the Data Editor are saved, the resulting file will have a ".sav" extension. If a file has been saved in the SAV format you can open it by selecting "File"->"Open"->"Data." 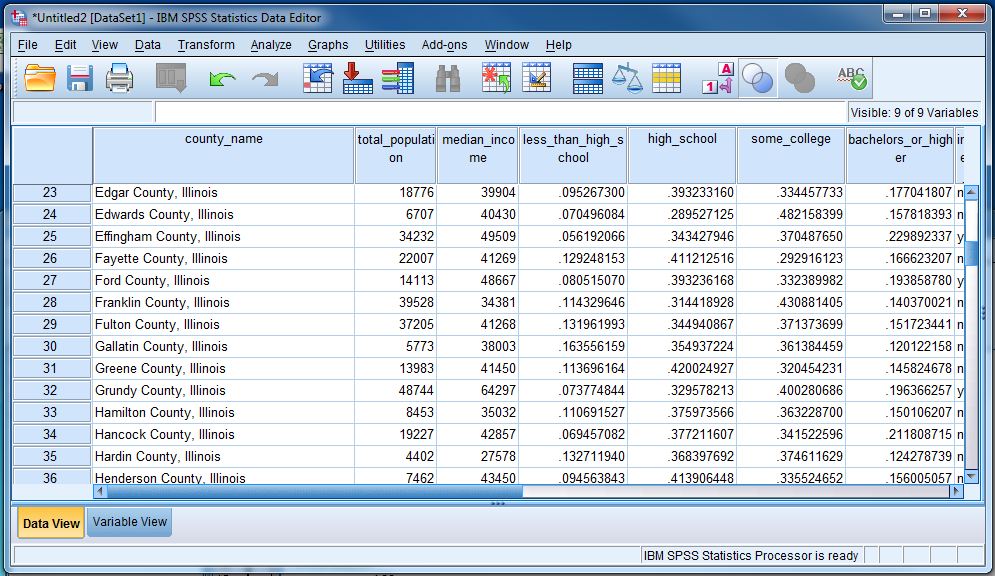 Each variable in an SPSS dataset has a set of attributes that can be edited by toggling to the "Variable View" tab in the Data Editor:

Name is the variable's machine readable name. This is the name used to refer to the variable in SPSS's underlying code and, if no "Label" is defined, the name that will appear at the top of the column in the "Data View."

Type indicates the type of data that can be stored in the variable's column. The most frequently used types are "String" (for text) and "Numeric." SPSS uses the type to know what rules can be applied to a specific variable. It won't do arithmetic on a string variable, for example.

Width indicates the allowed number of characters per instance.

Label sets the name that will be displayed at the top of the column in the Data Editor, allowing for a human readable representation of the variable name.

Values sets names given to coded values (e.g. if the variable contains survey responses where a "0" represents "no" and "1" represents a "yes" this field can be used to tell SPSS to display the text values instead of the numerical raw data).

Missing sets the values that will be encoded as "Missing."

Role is used by some SPSS dialogues to distinguish between the variable's intended usage in some predictive applications (e.g. regression, clustering, classification). For most dialogues the role won't be significant.

Clicking in the appropriate cell will open a dialogue box or drop down menu that allows the attribute value to be altered.

The Syntax Editor allows you to control SPSS using the SPSS command language, usually referred to as "syntax" in the SPSS documentation. At one time all of the user's interactions with SPSS would have been performed using syntax commands, but these days, most processes are automated in the Data Editor's menus. There are still times when writing or editing syntax commands is useful, or even necessary. To open the Syntax Editor, select "File"->"New"->"Syntax."

SPSS also has a Script Editor, which allows users to automate processes by writing programs in Visual Basic or (with an extension) Python. The application is outside of the scope of this guide, but can be a powerful tool when used for processing large numbers of files consecutively or transforming text.