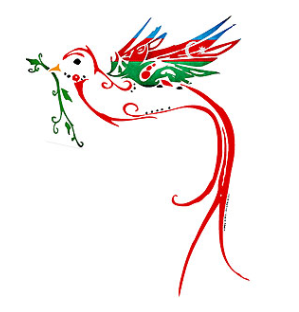 Evidence has been found which indicates the area where Azerbaijan is today may have been settled as far back as 350,000 to 400,000 years ago. Following the initiation of agriculture in the Fertile Crescent, Azerbaijan was colonized by many different groups and tribes whose archaeological sites suggest signs of farming, hunting, and social organization. Approximately 1,000 years ago the Mannaeans emerged as a dominant force in the region, followed by people including the Medes, the Persians under King Cyrus the Great in the sixth century BC, the period when Zoroastrianism was established, and Alexander the Great. About 200 years later, a new kingdom was founded in the north of the country by the Caucasian Albanians, the forerunner of the modern state of Azerbaijan.

By 400 AD, Christianity was the chief religion. Invasions by Turkic groups and then Arabs added new cultural and ethnic characteristics, and Azerbaijan became part of the Arabian Caliphate, which brought Islam to the region. Turkish, Arab, Seljuk, and Mongol invasions occurred in the Middle Ages. The Turkic conqueror Timur (Tamerlane) divided Azerbaijan into two states: Kara Goyunlu and Ak-Guyunlu. The latter prevailed until the early 1500s under the Safavids, a dynasty founded by Shah Isma῾il I (1487–1524), who decreed that the state religion would be Shia Islam. Azerbaijan was then reunited, with the capital at Tabriz. Conflicts with the Ottoman and Persian empires continued until the eighteenth century, when new alliances were formed. In 1781 the Azerbaijani state, which included part of Iran, was created, and treaties were signed (Gulistan in 1813 and Turkmenchay in 1828) between the warring Russians and Persians. Once again Azerbaijan was divided, bringing Russian control to several Azerbaijani regions and later a large influx of Armenians from Persia.

The oil boom of the 1870s brought investment but not peace. Some 20,000 Azerbaijanis were killed by Russian and Armenian troops in 1918 as land was annexed for Armenian settlement, prompting a declaration of independence by Azerbaijan and creation of the Azerbaijani Democratic Republic, the first secular state in the Islamic world. The new state, which included the region of Nagorno-Karabakh, was recognized at the Paris Peace Conference in January 1920. By late April, the Red Army had invaded the state's new capital, Baku; Azerbaijan became part of the Soviet Empire, with some release of territory to Armenia. In 1936 it was designated as a Soviet Socialist Republic and remained so until the collapse of the Soviet Union in 1991. The interim was not without event— ethnic cleansing of Azerbaijanis in Armenia occurred in 1988, causing a major influx of refugees to Baku; the Communists resisted a national movement for Azerbaijani independence in 1990 and sent 26,000 Soviet troops to Baku, resulting in approximately 130 civilian deaths and 700 injured. On 31 August 1991 the Azerbaijani Parliament adopted a declaration of independence, and an act establishing state independence of the Republic of Azerbaijan was passed on 18 October 1991. The following year President Ayaz Mutalibov fled Baku in the midst of unrest attributed to his failed domestic policies, and in February Armenians in the town of Khojali, Nagorno-Karabakh, massacred more than 600 Azerbaijanis because of a dispute as to which of the two post-Soviet Republics Nagorno Karabakh would belong. The Popular Front of Azerbaijan seized power, appointing Abülfaz Elçibay as president. Ethnic strife continued between Azeris and Armenians, with loss of life and the potential for civil war; when Elçibay fled Baku, due to a popular uprising and loss of Russian support, Heydar Aliyev, the respected leader of the autonomous republic of Naxçivan, returned to Baku (having been forced by Mikhail Gorbachev to resign from the Politburo) and took control; he became president of Azerbaijan in October 1993, the same year Azerbaijan joined the Commonwealth of Independent States (CIS), following United Nations resolutions demanding the withdrawal of Armenian troops from Azerbaijani territories. A ceasefire was signed in May 1994, the same year an oil deal was struck between Azerbaijan and a consortium of major oil companies. In 1996 Nagorno-Karabakh was accorded autonomy, but in 2007 remained part of Azerbaijan. Heydar Aliyev was reelected president in 1998 and Azerbaijan became a member of the Council of Europe in January 2001. In 2003 Heydar Aliyev died; his son, Ilham Aliyev, was elected president.

Troubles continued in Azerbaijan. The loss of the Soviet yoke and newfound independence paved the way for a resurgence of Islam. New mosques and madrasas were built and people openly embraced the faith. However, there was also a resurgence of fundamentalist Islam, attributed to the influence of Iran. In 1991 the Islamic Party of Azerbaijan was founded; some of its activities, notably the training of Islamic brigades, were unwelcome by the government, and its leaders were imprisoned in 1997; thereafter Iran's influence diminished. Other fundamentalist groups have emerged, such as the Lezgins, who embrace Wahhabism, possibly to underpin their bid for a separate state. The Lezgins, along with Russian Avars, make up the militant group known as the Warriors of Islam, whose efforts to turn Azerbaijan into an Islamic state had, as of 2007, been unsuccessful.

To find more materials on Azerbaijan and aspects of its history, you might try searching your library's Online Public Access Catalog (OPAC) for some of the following subject terms: 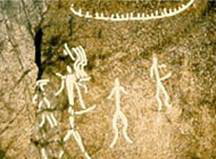 Archaeologists have found evidence in caves around Baku that suggests the area may have been settled during the Bronze Age (around 3,000 BC), but the earliest records and manuscripts recording Baku as a part of an Arab Caliphate date back to the 8th century AD.  In 1191 the Persian Shirvanshah dynasty triumphed in the wars with Arabs and Khazars which had lasted for centuries, to rule over Baku for the next half-century. During those years, the city underwent many Mongol invasians and wars with Ottoman Turks, however it managed to benefit from its location on the Silk Road and the Caspian Sea, which allowed Russian traders from Moscow who had sailed down the Volga river to trade in Baku's port.

With the fall of the Safavid dynasty in 1722, Baku became a prize to fight over for the Ottomans, Russians, and other local warlords.  The city was briefly held by Tsar Peter the Great, but when he died the Russians were forced out again until Tsar Alexander I regained control over Baku in 1806. 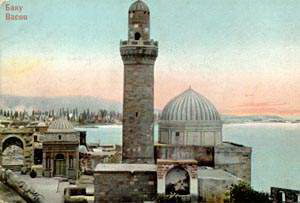 When the Russian Empire invited foreign oil investors into Baku in 1873, it opened the monetary floodgates, and by 1900 Baku was the largest supplier of oil on the world market.  Under the Soviet Union, however, much of that oil was used to fuel the economy, and during WWII, Hitler made obtaining Baku one of the German military's primary objectives.  This desire for the Nazis to gain Baku and its oilfields resulted in the Battle of Stalingrad (1942-43), and was a major turning point for the Soviets against Nazi Germany. 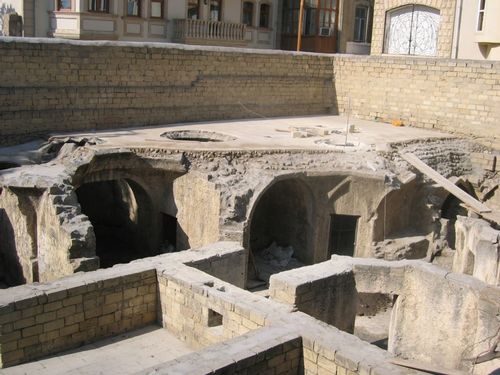 A chronology of key events:

1994 - Armenia, Azerbaijan and Nagorno-Karabakh sign a ceasefire accord. Ethnic Armenians remain in control of Karabakh and a swathe of Azerbaijani territory around it. Mr Aliyev -the new president - cracks down hard on People's Front. Azerbaijani forces mount Karabakh counteroffensive.

Armenia, Azerbaijan and Nagorno-Karabakh sign a ceasefire. Ethnic Armenians remain in control of Karabakh and a swathe of Azerbaijani territory around it. PM Huseynov is dismissed and flees to Russia.

1994 - Azerbaijan signs what it calls the "contract of the century" with a consortium of international oil companies for the exploration and exploitation of three offshore oil fields.

1995 - Government troops crush rebellion by Rovshan Jovadov's special police. He and dozens of other rebels are killed.

1998 - Opposition activists arrested at protests against what they say are unfair elections in which Heydar Aliyev is returned as president. International observers report irregularities.

Into the new millennium

Azerbaijan officially shifts to the Latin alphabet for the Azeri language, in the fourth alphabet change in a century.

2002 May - Pope John Paul II makes his first visit to Azerbaijan and appeals for an end to religious wars.

2002 August - Referendum on amendments to constitution said to get strong support from voters. Critics allege irregularities, say poll is ruse to allow president to hand over power to his son.

2005 September-October - Police use force to break up opposition demonstrations in Baku as parliamentary elections approach.

2006 July - Baku-Tbilisi-Ceyhan pipeline formally opened at ceremony in Turkey after Caspian oil starts flowing along it.

2008 March - The worst fighting in recent years breaks out in Nagorno-Karabakh. Azerbaijan and Armenia accuse each other of starting the clashes, which leave several dead on each side.

2008 April - Azerbaijan allows Russian cargo of nuclear heat-isolating equipment to cross into Iran after holding it up for a month. The equipment was intended for the Bushehr nuclear plant.

2008 October - Ilham Aliyev wins a second term as president. In November - Armenia and Azerbaijan sign a joint agreement aimed at intensifying efforts to resolve their dispute over territory of Nagorno-Karabakh.

2009 March - Referendum initiative to abolish a law limiting the president to two terms is passed with nearly 92% of the vote; the move means President Ilham Aliyev would be able to stand for a third term.

2010 April - Head of the Armenian church, Garegin II, makes first visit by senior Armenian cleric since the Nagorno-Karabakh conflict in the 1990s.

There are two cited theories are for the etymology of the name "Azerbaijan;" the first is "land of fire" since azer, means "fire," it refers to the natural burning of surface oil deposits or to the oil-fueled fires in temples of the Zoroastrian religion.  The second name, Atropaten, is an ancient name of the region (Atropat was a governor of Alexander the Great in the fourth century B.C.). The place name has been used in reference to the Azeri people since the late 1930s, during the Soviet period, when the northern part of historical Azerbaijan was part of the former Soviet Union.